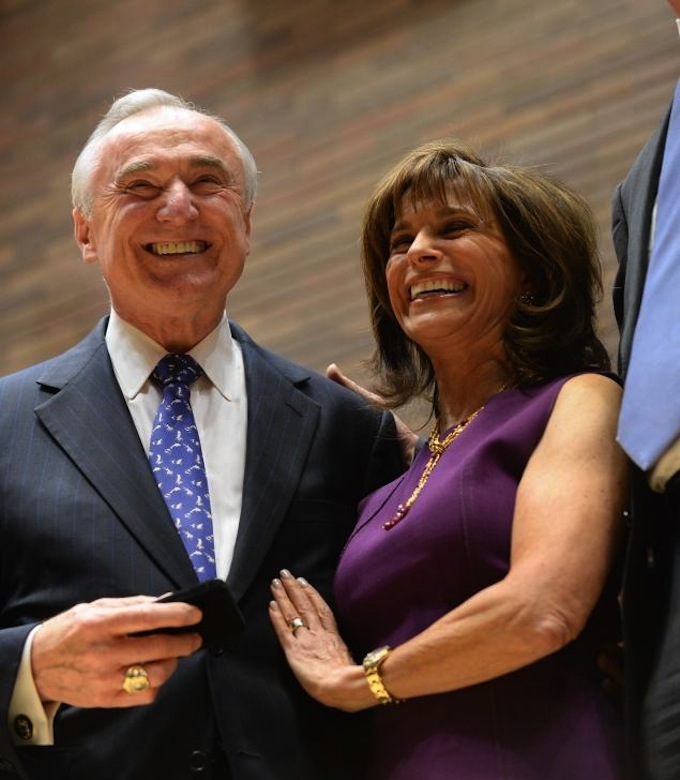 Rikki Klieman intends to be a big presence in Bratton’s second go-round as New York City’s top cop. She stuck by him as head of LAPD and helped him get things done.

Mayor de Blasio and his wife, Chirlane McCray, aren’t the only new power couple in town.
The wife of Police Commissioner Bill Bratton, Rikki Klieman, plans to be a visible presence as he settles into his second stint as the city’s top cop.
“I would like to go to community meetings with him,” Klieman told the Daily News. “I want to go to the churches with him.”
A former top trial attorney and CourtTV anchor who now provides legal analysis on CBS, Klieman said her connections will be an asset as Bratton seeks to mend relations with the black community by overhauling the NYPD’s controversial stop-and-frisk tactics.
“I know Rev. (Al) Sharpton, because I’ve interviewed him,” she said. “I bring a lot of good will to the table. These are people in the community who respect me and generally like me.”
Before making a name for herself on television, Klieman defended high-profile clients in Boston — including FBI fugitive and ’60s radical Katherine Ann Power — that sometimes put her at odds with Beantown cops.

When Bratton served as Los Angeles police commissioner from 2002 to 2009, his wife’s role in diverse communities worked to his advantage, he said.
“Part of my acceptance very quickly into the city’s minority communities was as a direct result of her involvement,” Bratton, 66, told The News. “She made sure I attended a lot of events I might not have been aware of. She brought to my attention issues the department needed to focus on.”
Klieman, 65, worked full time on Bratton’s transition team, serving as a liaison with de Blasio’s office and sitting in on many meetings with Bratton’s command staff. And she plans to join with foundations like the Police Athletic League.
“In some respects, the city’s getting a two-fer,” Bratton said.

“Sometimes I can come across as cold or withdrawn, and Rikki certainly balances that. She’s a phenomenal set of additional eyes and ears, and she’s a different way of reaching me.”

Their relationship mirrors that between de Blasio and his wife, Chirlane, who has been playing a powerful behind-the-scenes role in the mayor’s transition and in the opening paces of his administration.

The two couples clicked in their first meeting.
“Chirlane and I took to each other, which I think happens with strong, secure, reasonably attractive women who immediately bond,” Klieman said of the three-hour dinner the couples shared at Convivium Osteria in Brooklyn.
“Chirlane was terrific when she came to Bill’s swearing in. I really felt like I had a kindred soul sitting out there with me.”
Bratton and his wife had settled back into life as private citizens after returning to New York from Los Angeles in 2009. It came as a shock when Bratton told her last fall that he was considering another stint as police commissioner.
“Was I anxious, nervous, concerned and upset? Of course,” Klieman said over a lunch of tuna tartare at Fresco’s, near their Midtown apartment.
“On the one hand, I thought, ‘There goes my peaceful life again.’ On the other hand, to deny him this would be to deny him breathing.”

For one thing, re-entering public service meant a lifestyle change for the high-profile duo.

“The financial adjustment for us was astronomical,” Klieman said of the pay cut Bratton took by leaving consulting behind. “But if you are going to support a spouse in public service emotionally, your job is to adjust.”
Klieman has already taken on more work to compensate. She recently signed on to cover passenger rights on PBS’ “The Travel Detective.”
Even with the new demands of life in the spotlight, Klieman said the couple carves out “Rikki and Billy time” to stay connected.
“He leaves greeting cards for me all over the house,” she divulged. “He goes out and buys greeting cards. The other night I lost my voice. He came back that night, I got into bed and he put a police teddy bear next to me.”
The couple check in often during the day.

“We text during the day. In BlackBerry-land, that is called ‘pin communication.’ We’re pinners. Occasionally we each pin an ‘I love you’ pin.”
Part of their newlywed air is due to the fact that they met late in life, Klieman admitted.
The couple married in 1999 — Klieman’s third marriage and Bratton’s fourth time down the aisle. They don’t have children together, but Bratton has a son, David, from another marriage, as well as grandchildren.
“I have a built-in family,” Klieman said. “I have no brothers and sisters and my parents are long gone, so the Brattons are my family.”
For his part, Bratton is certain their happy partnership will benefit New York.
“Rikki’s smart as a whip as an attorney, and a former prosecutor,” he said. “New York benefits by getting this very talented, successful person at no cost. And in all my years of marriage with her, I have never found a single person that doesn’t like her.”